“ChouChou! I have to break your nose!” my wife announced, as she flew through our front door one Sunday morning.

If there’s one thing I enjoy doing, it’s helping people achieve their goals. Part of my business is helping people make their largest investment. But also doing something small on your part can make a huge difference in someone else’s world. In this case, it was letting my wife break my nose.

My wife, Joelle, decided to build a business around her lifelong passion: makeup. The problem is that there are a ton of “makeup artists” out there. If you post an ad, looking for a makeup artist, you’ll get 200 responses within hours. Competition is fierce!

As fate would have it, a movie director was negotiating to film in our house. I mentioned to him that Joelle just happened to be a makeup artist.

The director smiled politely, listening to my praises. Thanks but no thanks. They had already hired a makeup artist.

Joelle was taking a beauty makeup class at the time, to expand her already extensive skill-set. For their last class, the instructor announced that they were going to do something fun: special effects makeup for film. Blood, gore, icky stuff.

After that last class, Joelle raced home, ready to make my face look like four drunk dudes used it as a bowling ball.

And I was totally cool with that.

The transformation began. A bruise here; busted lip there; let’s add a swollen eye for good measure. But the pièce de résistance – the broken nose. She spent 30 minutes, crafting the most painful broken nose you had ever seen.

When finished, Joelle snapped about eleventy gabillion photos. Finally she asked if I was ready to wash up.

The movie director, Matt, was coming by shortly with some final paperwork. I had a sneaky thought. What if I kept this makeup on for the director to see? What would he think?

From our door – knock knock!

For the makeup to be real, you have to sell it. That means you act like you’re in pain. I acted once. I was soldier number 3 in the Wizard of Oz back in grade school. Maybe if I acted hungover?

I slowly opened the door. Upon seeing my busted up face, the director’s smile vanished.

Continuing my Oscar worthy performance, I said “Oh, yeah, my face. Well, when your mom says to tie your shoes … you better listen to her.”

Matt started leaning backwards. He was ready to bolt.

I burst out laughing. “This is all makeup! It’s fake!”

He eventually came in and we got the paperwork signed. He walked us through when the film crew would arrive, where they planned to set up, permits and all that good stuff.

During our conversation, he asked no questions, made no comments about my busted up face.

At the end, he stood up to leave. He shook my wife’s hand, and then mine. He walked to the door, hand reaching for the knob.

My stomach sank. All was lost. This opportunity was leaving and there was nothing we could do about it. How would Joelle break into this business?

Then the director stopped, turned and looked at my wife. “You know, there’s a spot for you on my film if you want it.”

Joelle smiled ear to ear. “Sure!”

That gig lead to another. And another. Mostly student films which became bigger short films, music videos, corporate videos and commercials. Because of her strong work ethic, quality of work and reliability, most of her business is repeat and by referral.

One day feature films started coming her way. Now, as you read this, she is working on her biggest feature film yet in West Virginia.

To say I’m proud of her would be an understatement.

For my part, a few hours a week, I climb into her makeup chair in our backyard while she does her worst. To date, I’ve had my throat slit, eyeball plucked out, used a box-cutter to carve up my chest while wrapped in plastic-wrap (which isn’t as sexy as it sounds). I’ve been shot in the chest, head and eye. I had my teeth knocked out and have aged 40 years (mugshot below). The list goes on. 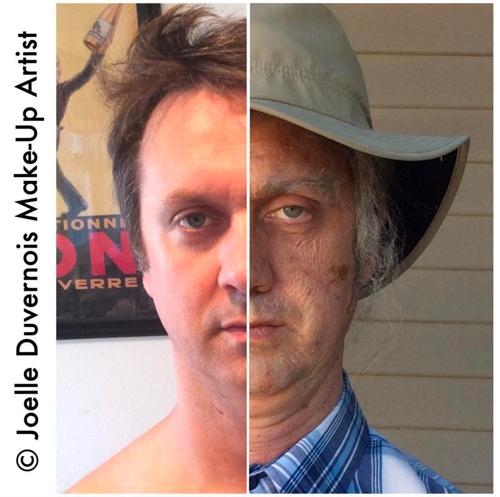 Whatever crawls out from the director’s dark imagination, Joelle makes it happen.

The movie industry is not easy to get into.  Hollywood is filled with dreamers, all waiting for their big break.

For Joelle, it wasn’t a big break.  It was a small break.  A break in my nose.  A break that she carefully crafted for 30 minutes before opportunity came knocking at her door.

I do get a kick out of helping people.  Whether it’s in my personal life or in my business.   For Joelle, all I had to do was wear some makeup and play a small role.